International politics is something that preoccupies Hadjidakis seriously and steadily. And since his ideological choice is not so closely connected with external affairs as with internal ones, his views on the former are even more scathing. And this goes way back.

“It’s just after midnight and we still don’t know if Nixon will be President”,he writes in a letter to Dimitris Vernicos in November 1968 from New York.Today’s elections make me feel that “I’m watching a play, a performance, where the understudies are taking the place of the leading actors.” Next day he writes: “Nixon is President … and America has acquired its true face: Reactionary, chauvinistic, neat.”

Mao Tse Tung’s cultural revolution impresses him. He writes so to Karamanlis. Years later, in 1976 (few years before the scandal with Avriani newspaper), he comments prophetically on the death of the Chinese leader: “With him has died for good the poetry of popular revolutions. Now begins the deadly bureaucracy of powerful systems. And now it’s the turn of the flower generation, he remarks when Clinton is elected US President. But in actuality America remains the same. There’s the CIA and there is doubt.” 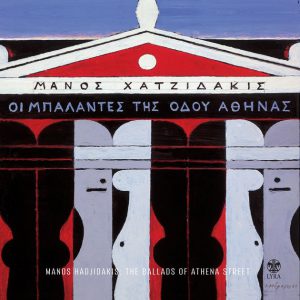 In Tetarto, he publishes articles on the “Grand Process of Polish Resistance (1981-5)”, nuclear targets, Greenpeace and, as usual, wry remarks about Khadafi. When he is advised that “what it costs for just six hours of armament could save 36 million children,” Hadjidakis sadly notes:

This is naïve reasoning … because even if those responsible were to cease the arms race for just six hours in order to save starving people, why would they continue once the six hours were over? To kill those they saved from starvation? No, the arms race and hunger are two different values, two different ideas; they are not exchangeable; they don’t affect one another; they don’t meet; they merely coexist.

Hadjidakis didn’t believe in “committed art.” In fact, he sniffed at the stale idea of it, especially those who tried to convince us that … when you have a severe toothache is the right moment to describe or record, once and for all, what it is to have a toothache. And this they named with an arbitrary charming hypocrisy “Art for the People”, without revealing, of course, through ignorance or ruse, that they falsified irreparably the notion of both people and art. And this is why:

Habits and necessities change. Our sensibility endures and remains unchanged through time. And this is what art is called upon to represent and record, in spite of what events and the omnipotence of the so-called “historical moments”.

Wasn’t it in 1972, during the period of dictatorship, that his LP Magnus Eroticus was released?  But let’s face it, as aestheticism is omnipresent in his politics, so are politics in his aestheticism. Not only in his decision to give a concert on the anniversary of the assassination of Pavlos Bakoyannis by the brutal organization “17 November,” but also in a love song from The Ballads of Athena Street:

Brought up with national paranoia,
Our desires buried in museums,
We turned our passions to ancient music
And our love became a tribulation.

How then avoid political references in the stage performance of Pornography in 1982? The composer characterizes The “Three Rosasas a motet unsuitable for and rather hostile to young people belonging to the Communist Youth Organization (KNE) as well as those of the extreme Right”. On another occasion, he directs the chorus, the lyrics being his own:

Greece resembles you, Blanche Epiphanie.
She disposes of ethos, naivete and patience
Regardless that she is regularly raped by invaders.
With stubbornness,
The Greek Epiphanie
Always manages to remain
A virgin and nude.

Then again, the lyrics of Nikos Gatsos, set to music by Hadjidakis, are not devoid of political innuendos, as in Absurdities (1976):

Where pennyroyal and wild mint grew
And the earth produced its first cyclamen,
Now villagers are bargaining for cement
And birds fall dead in the blast furnace.

How different is their mutual disappointment from the romanticism of the twenty year-old Manos, when in 1946 he expressed his new hope in his composition, Workers’ Cantata, dedicated to Manolis Anagnostakis:

A brave warrior’s sword knows no fear.
He has a sickle for a cry and a hammer for a vow…
The earth is singing and will not stop
And May is making merry with the workers,
What if fine upstanding lads are falling dead
Like wild pigeons in the sad plain, a spell on their lips?
Their blood is a carnation, their cry a lily…