What were Hadjidakis’ personal experiences, what was his upbringing that conduced to his deep caring about weak persons even before he knew the meaning of social justice? The Greek composer himself supplies the answer, as he does about so many other matters.
My father never beat me. Only once did he give me a thrashing for being rude to a maid. And he made me kiss her feet. Believe me, I did so without resentment, considering it my duty. Ever since I have always respected the demands of workers, whatever worker.
Later, on a number of occasions, he sought to describe himself.
– I am a democrat, an upper-class humanitarian, and a right-wing revisionist. That I’m not fond of dollars or Siberias is a fact.
– I was never anticommunist…There’s a leftist in me, but leftism doesn’t have me. By upper class I don’t mean a car dealer who became rich overnight and is now having a spree in nightclubs. 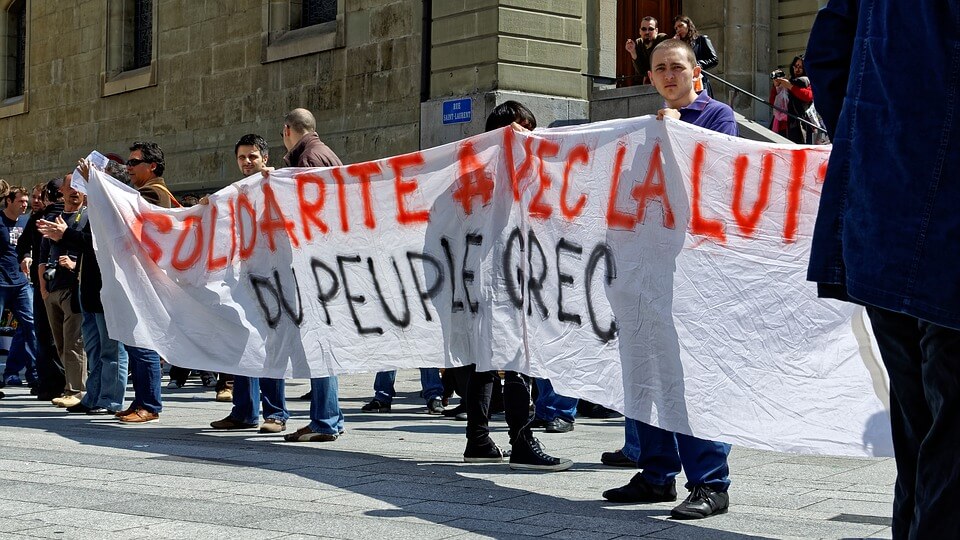 In his last contact with the public, a week before his death in June 1994, in a joint interview to Kyriakatiki Eleftherotypia[Sunday Free Press] and Kathimerini tis Kyriakis [Sunday Daily], he said: My demeanour is that of an upper-class individual. My culture is that of a poet. Idiosyncratically I am a commoner.
Q: One time you had said that you were to the left of the Right.
H: Yes, because the Left should include all concerned human beings. Any man who doesn’t compromise is a leftist.

However, Hadjidakis presented a more complete picture of his political identity in one of his more personal articles in Tetarto (July 1985).
Our own lads had also a seat up in the gods (from the title of Carnet’s film) and observed the crimes taking place on Greek soil, powerless to intervene on what had come to pass and what was happening now…After the war the ghosts reappeared and took to distorting Greek history once again. And all the young people who fought and dreamed became the gods – all those, that is, who weren’t persecuted or carted off to prison and barren islands of the Aegean…It is appalling to believe that all the gods were followers of Zahariadis and of Markos…

The gods were not unprincipled, they weren’t opprobrious, they didn’t suffer from fascist abnormality. They didn’t come to terms with the German oppressor; they weren’t “patriots” with a cop’s or a thug’s mentality. Their minds were instruments, their eyes were moist and tireless enabling them to observe the world, and their souls were pure and uncompromising in the postwar misery that was Greece…
…The gods today are grey-or white-haired. Those who have survived have forgotten their dreams; they have finally come to accept what the future has in store for them. Only a few, among whom myself, stubbornly and resolutely remember and insist on reminding others for as long as it takes…
TOP